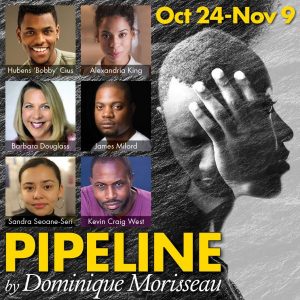 WAM Theatre presents Pipeline by Dominique Morisseau at the Elayne Bernstein Theatre at Shakespeare and Company in Lenox, Massachusetts through November 9. This is a remarkable play that is one of the most widely produced plays of our time because of its subject, the skill of the playwright, and the completely engaging characters that tell the story of a young black man’s struggle to find his way in our society. We see the world through a variety of perspectives as the boy’s mother tries to find ways to help him. Within the structure of the ninety minute play, you l find yourself caring for each person you encounter.

Listen to Bob and I discuss the play, Pipeline Discussion

Read some of the reviews, Berkshire Theatre Critics Association 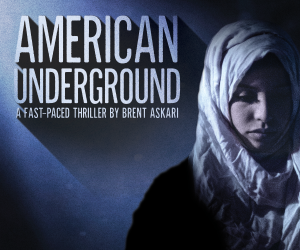 Barrington Stage Company presents American Underground at the Boyd-Quinson Mainstage through October 20. This is a production that should not be missed. The play is absorbing minute by minute while raising questions that the audience will want to think about and discuss. The play opens with a man watching a game on his computer while his wife is worried that their son who attends college has not yet come home. When he arrives, they are relieved and Dad starts the barbecue. Although the boy is disturbed by what happened at the mall, all seems manageable until later that night there is a knock at the glass porch door. A young Muslim woman is asking for help. What happens  next you need to see for yourself.

After listening to our discussion of American Underground

For what others have said, check Berkshire Theatre Critics Association

While waiting for your tickets to arrive watch this video

Time Stands Still plays at Shakespeare and Company in Lenox, Massachusetts through October 13. The play  addresses much that concerns us as we watch television or read magazines and newspapers and see the visual accounts of distant wars. The story is also a personal one of people in complicated relationships. As usual at Shakespeare and Company, the actors absorb you into their world of these friends and lovers. We always marvel at how skillfully the actors  move from Shakespeare to contemporary plays and are fully the specific characters they are performing. This is absorbing theatre on every level. Listen to our brief comments on the play Time Stands Still

Topdog/Underdog plays at Shakespeare and Company’s Tina Packer Theatre through September 8. The play by Suzan-Lori Parks was named by the New York Times as the most important American play in the last twenty-five years. Set in the present, the play is haunted by the history of black families in the United States. Dealing with issues that resonate in their personal lives, the brothers are also facing the  larger problem of survival. Booth is a skilled shop lifter and Lincoln is a reformed card shark.  In the small space they share emotions range from brotherly love to sibling rivalry as they help and hurt each other. There are joyous moments and sad ones. You can listen to what Bob and I thought of the play by clicking on Topdog/Underdog discussion.

Watch the video of the cast and director discussing the play

Barrington Stage Company  presents If I Forget at the St. Germain Stage through Saturday, September 7.  Take a short trip back in time to 2000 and 2001 and visit with this Jewish American family as they deal with the personal and social issues confronting American families in the 21st century. The brother and two sisters gather to celebrate the 75th birthday of their recently widowed father. We see the tensions and the love typical of  families who have their  problems and secrets. Memories of their mother and their childhood blend with memories of Jewish history and tradition. There is humor and struggle as they confront their own and their family’s strengths and weaknesses. Bob and I were busily discussing the play from the time we left the theatre until now and will probably continue discussing it. . You can listen in to one of our discussions by clicking on If I Forget Discussion

Oldcastle Theatre presents Judevine by David Budbill from August 16 through September 1. This is a unique vision of Vermont shown through the eyes of one of its most outstanding writers. Six actors play more than forty characters as we see a small town in Northern Vermont come alive through the people who inhabit it. This is a classic play that Oldcastle has produced before. Each time it is different as both the audience and the actors are different. This is theatre as it should be, a melding of the writers’, the actors’    and the audience’s imagination to create a familiar world that still has many surprises. Bob and I have always enjoyed the various productions and are looking forward to this one. We had the pleasure of interviewing two of the actors,  Christine Decker and Justin Pietropaolo in between rehearsals.

For tickets and information visit oldcastletheatre.org  or call 802-447-0564 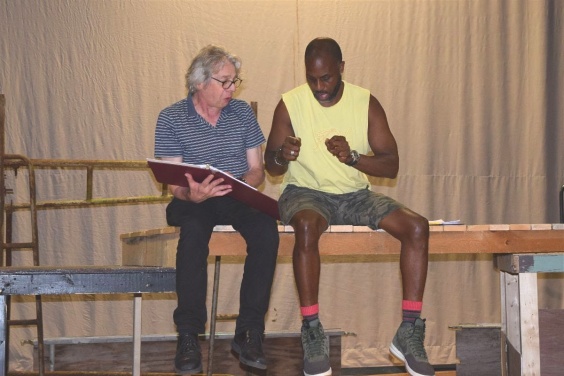 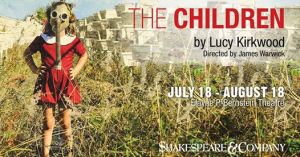 Shakespeare and Company presents The Children by Lucy Kirkwood at the Elayne Bernstein Theatre through August 18. This play blends comedy and drama as three old friends deal with issues that are personal and social. The audience is engrossed as each moment reveals new information about the trio’s complicated relationship. Set in England, the play deals with matters that are contemporary and universal. Although no children appear on stage, questions about the children are crucial to understanding their situation.

Discussion of The Children

James Warwick on The Children 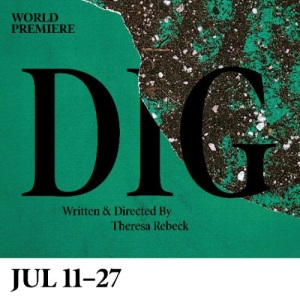 The Dorset Theatre Festival  presents the world premiere of Dig  through July 27.  With its absorbing themes and complex characters, this play should have many future productions. The setting, an old shop filled with plants  is not the usual one for a play. The audience enters another world as it gets to know the complicated people who find solace in the plants they tend. Written and directed by Theresa Rebeck, this play offers insight into flawed but redeemable humans whom you care about.  For Bob and myself, seeing new plays is exciting as we enter lives we have known little or nothing of before. However much we enjoy a play, it is always a learning experience as people are brought to life through the skill of the actors and director. We have seen many plays by Theresa Rebeck and are always impressed by the diversity of her work as she explores the  stories of different people in various worlds. Try not to miss this play. 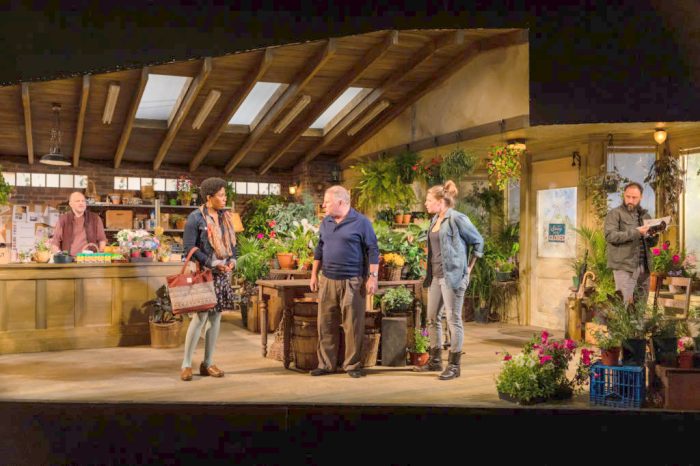 Selling Kabul is playing through July 20. Like the other productions at the Williamstown Theatre Festival’s Nikos Stage , it is a World Premiere. Bob and I had not realized how short the run of the play was, but we are glad that we saw it and urge others to do so if they can. The play will be having an Off Broadway production at Playwrights Horizons in New York in March 2020. The intimate drama is worth seeing as it combines the human and the political while exploring the consequences of the United States breaking its promises to Afghan interpreters that they would receive visas to America. We see a young man who has put his wife, his child,, his sister and her husband and many others in danger as he hides from those who consider him a traitor for helping the Americans and other countries in this continuing war. Each of the actors brings his or her character to vivid life.    Williamstown Theatre Festival director Mandy Greenfield, is to be commended for producing new and thought provoking and moving plays that engage audiences while making them think.  Check out the other plays at the Festival so that you don’t miss any of the fine productions they offer.

A Raisin in the Sun is on the Main Stage at the Willamstown Theatre Festival through July 13. Bob and I saw the original production sixty years ago. I have also taught the play so we were looking forward to seeing this production. We were thrilled with it. As vivid as our memories were of the original cast, this cast and this director made it their own. Listen to our reactions by clicking below

Discussion of A Raisin in the Sun

For other opinions, check out The Berkshire Theatre Critics Association 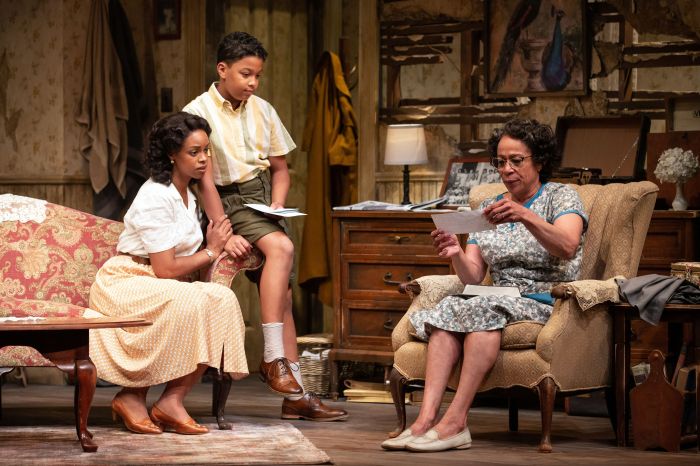