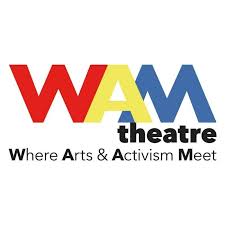 WAM Theatre is starting its ninth year.  Inspired by the book Half The Sky: Turning Oppression into Opportunity for Women Worldwide by Nicholas Kristof and Sheryl WuDunn, WAM Theatre has not only devoted itself to telling women’s stories through play readings, productions and educational programs,  it also has  donated a percentage of its profits from productions to women’s groups throughout the world. In 2017, The Berkshire Theatre Critics Association awarded artistic director  Kristen van Ginhoven and WAM Theatre The Larry Murray Award for Community Outreach and Support Through Theatre.

Bob and I interviewed Kristen  in WAM’s office in Lenox  to learn about what this season offers in the way of play readings and productions. One of the unique aspects of WAM is that it does not have its own theatre space, but works collaboratively with other theatre companies in the region, sometimes renting space, other times co-producing plays. Besides heading  WAM, Kristen also directs for other theatre companies. Listen to what she shares about the coming season by clicking below.

Then go to WAM’s website for more information and to order tickets.