Skip to content
HomeOnce Upon A Time in the Berkshires 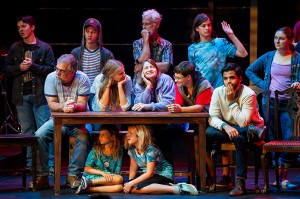 Traditionally, The Williamstown Theatre Festival has offered a free performance to Williamstown residents and others in the area, welcoming anyone who comes to the free event. However, this is the second year when these productions have changed. The Community Engagement Initiative brings together members of the community to work alongside professional actors in the world premiere  of a  play. This play grows out of workshops in playwriting and acting that the Williamstown Theatre Festival conducts for community members in Western Massachusetts in the fall, winter and spring.

In this year’s production, three children ask their grandmother to tell them about a long time ago.  She weaves an exciting tale about magical creatures and warriors and young lovers. The play, written by Lucy Thurber,  is directed by Williamstown Theatre Associate Artistic Director Laura Savia

Earlier in the season, Bob and I had the pleasure of interviewing Lucy and Laura about the play and the process of engaging community members. Their excitement   about it was mirrored by a friend of ours from the Berkshires who told us that she was in it and that we must be sure to see it. We wouldn’t miss it. The play runs from August 13 to August 19 on the Williamstown Theatre Festival Mainstage.

To reserve tickets go to http://wtfestival.org/main-events/once-upon-a-time-in-the-berkshires/ There are only four performances and the opening night is already filled.

Rehearsal photos below were taken by Daniel Radar