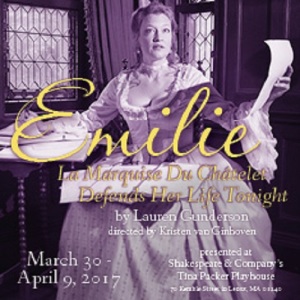 WAM Theatre is remounting Emilie, a play it first presented in 2013, with the same cast. It will be performed at Shakespeare and Company March 30 to April 9 at 7:30 pm.  Although Emilie du Chatelet was also known as Voltaire’s mistress, she was a brilliant physicist and mathematician whose commentary on Isaac Newton’s book Principia was groundbreaking as she added the concept of the law of conservation of energy. When Bob and I saw the play in its original production, we were fascinated by it.  This was another  outstanding woman of whom we knew nothing. The production and the performances were magical. We are looking forward to seeing it again. We were fortunate  to interview the two leads, Kim Stauffer and Oliver Wadsworth, about this new production. Listen to what they have to say about what it means to recreate a play they have performed previously, then be sure see the play yourselves. It is a unique theatrical experience.