Skip to content
HomeThe Consul, The Tramp, and America’s Sweetheart 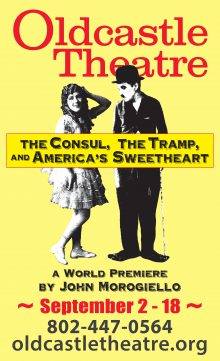 Before the new play at Oldcastle opened, we kept telling people to see it because three outstanding actors were in it. Bob and I interviewed two of these actors, Paul Romero and David Joseph, before the play opened. When we saw the play, the other actor whose work we know well, Elizabeth Aspenlieder, was as wonderful as we expected and the fourth actor, who was new to us, Lori Vega was right up there with our three favorites.  The play itself is worthy of their talents. It is funny, engaging,  delightfully recording a little known historic moment in the history of movies.

The play by John Morogiello is a new one. Producing new plays is always a risk and Oldcastle Theatre is to be commended on having the courage to take that risk. This is the third new play by Morogiello that Oldcastle has produced and they keep getting better and better. Playwrights need to have theatres produce their works because the interaction with the director and actors is valuable for them as is the excitement for the actors of creating new work. The audience enjoys the thrill of something fresh and new. Everyone wins. The play runs until September 18.

Click below for our interview with Paul Romero and David Joseph